Shipping calculated at checkout.
The Lotus Group Granada
The Lotus Group Granada Loudspeaker with X1 Crossover 1 Pair $150,000
​The value of a loudspeaker to the listener can be judged by the extent that it brings a recording into the present. It must not only recreate the illusion of the space the recording was made in, it must make that space believable and rock solid. It must deliver a palpable sense of the musicians' presence and show us plainly the intent and nuance of their artistry. It should be able to define exactly the effect of the interaction of venue and artist and enable us to distinguish between the two. It must draw the listener into a world where all thought of equipment is lost, leaving us in awe of and emotionally connected to the spontaneously arising event. We believe that the Granada uniquely masters this challenge.Feastrex Field Coil DriversThe Feastrex field coil drivers represent the pinnacle of speaker driver design. Their use of the world's finest handmade washi paper cones, lambskin leather surrounds, and a variety of extremely powerful electro-magnets, are legendary. Our intent in creating the Granada Loudspeaker is to take advantage of their greatest strengths and to augment those strengths so that a new previously unheard level of performance can be achieved.​Open Baffle DesignWe have chosen an open baffle design. Why? Simply, wiith no "box" to contend with, there are no "box colorations". The speaker drivers breathe naturally and present their pristine innate qualities. No box means bass that is clear and powerful and much less susceptible to room excitations. Our baffle is machined from a three inch slab of Finnish Birch plywood, not mdf which will deaden the sound. Since the Granada is a bespoke product, we can build your pair with any veneer, laminate or finish that will best suit your taste. The Granada represents the pinnacle of 'Made in America' craftsmanship.
Why Woofers?Why mate a driver designed for full range performance with woofers? The Feastrex field coil drivers are a force to contend with. On their own, in a modest cabinet they will provide extraordinary performance. Why then introduce more complexity to a loudspeaker driver designed for solo use?Because in loudspeaker design, there is no free lunch: The box used to enhance the bass of a single driver, must necessarily add colorations even if benign, and a single 5" driver with limited cone excursion can only produce so much bass. When massively driven by an uncompressed bass signal or orchestral crescendo, a single driver can only do so much before it will begin to distort or bottom out. This is in the nature of the 'beast' and comes with the territory. A confirmed single driver user will tell you that the compromise is worth it. There is much to be said for this approach. On the other hand, there is a benefit to be derived by relieving the main driver of low bass duty. Now the 5" driver can operate freely with less distortion within the very broad range that is its comfort zone. In the case of the Granada we wanted to offer a speaker without limitations, or as close as humanly possible. In order to produce adequate bass in an open baffle, high excursion woofers are required. The woofers employed feature massive under-hung motors with a full copper sleeve on the pole. This insures extreme linearity and extremely low distortion. Each driver features dual 8 ohm voice coils with a high Q and low Fs for maximum power and efficiency.The CrossoverThe Granada is an actively bi-amplified loudspeaker. Thus a crossover of some type is required. Preserving the purity of the Feastrex drivers was our top priority. As such, no reactive components could be permitted between the amplifier and the loudspeaker. Passive crossovers were ruled out, and analog or digital active crossovers were the remaining choices. Of the two, the option that affords the greatest precision and flexibility is the digital option. With the digital option, we are able to perfectly match drivers for maximum imaging capabilities, properly smooth the power and frequency response and tune the loudspeaker to each individual room that it will be placed in. For those fearful that a digital crossover will somehow compromise the purity of their analog signal, we invite you to listen for yourself. The Granada's digital crossover processes acoustic information at 48 bits in real time, and is utterly transparent. We feel that the advantages of a state of the art digital crossover, when properly and subtlely implemented far outweigh any advantages that an analog circuit may provide. The Granada Loudspeaker couples the lastest, most up to date technology with museum quality workmanship from Japan's finest mastercraftsmen to create a new concept in loudspeaker design that will take your breath away.The Upgrade PathIntrinsic to the use of up-to-date digital technology is the idea that it will evolve over time. As new technology emerges that provides a demonstrable advantage to the Granada owner, we will offer it as an upgrade. To date, state-of-the-art room correction is available as an option on all models. Other highly attractive options are currently being developed. We plan to stay abreast of new developments in digital technology, and remain at the leading edge of the digital/loudspeaker interface. 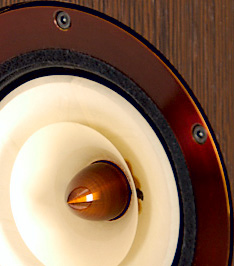 The DesignOur design objective was to realize a shape that would provide the best possible sound while fitting into a real world environment. Its proportions had to be pleasing and convey a sense of solidity as though the speaker itself had grown on the spot where it stands - monumental yet graceful.The SoundFrom the softest whisper to the loudest crescendo, the Granada remains steadfast and unflappable, delivering awe inspiring performance. Breaking through old concepts and fixed ideas, this loudpseaker will require you to forge a new understanding of the potential that lies within recorded music.Voicing the GranadaA total of 72 measurements were taken over 360 degrees in the horizontal plane and 360 degrees in the vertical plane to measure axial frequency response, overall power response and primary listening window response. Subtle adjustments were made as needed to assure that the Granada remained on track as a faithful representative of the artistry of the Feastrex driver, while delivering the most linear response possible.Our engineer, Manny LaCarrubba, former chief engineer of the Record Plant in Sausalito, California - brings years of experience as a designer and builder of high level recording studios, as a veteran loudspeaker designer with several patents in the field of loudspeaker design to his name and a lifetime professional career in music production and room acoustics design. By means of good science and careful measurement he has sucessfully brought together the best of east and west.The ChoiceWhen you choose the Granada you are choosing a combination of the finest in old world craftsmanship mated with the latest most advanced technologies. You are choosing an heirloom product that will bring enjoyment and pleasure for decades, backed by a commitment to highest quality, with no compromise anywhere.
Specifications: 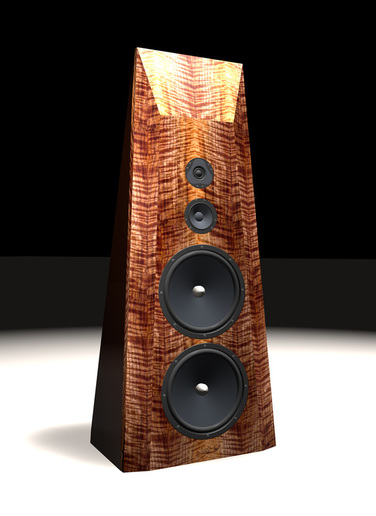 “...a really significant new loudspeaker” Michael Fremer - Stereophile Magazine  Once in a decade or so, a new concept in loudspeaker design emerges that turns convention on its head, causing the most critical listeners and reviewers to re-examine old ideas and embrace a new paradigm. The Lotus Group G2 is such a loudspeaker. From the softest whisper to the loudest crescendo, the G2 remains steadfast and unflappable, delivering awe inspiring, uncolored and purely natural performance that will enable you to see more deeply into the intent of the artist, composer, arranger and engineer. Combining the latest leading edge digital crossover technology with room friendly, true dipole design, the G2 is precisely calibrated in the anechoic chamber and subsequently tuned to mate perfectly with your room. Our commitment to the listener is to deliver a loudspeaker that performs at its maximum capability. To insure that this is the case, our acoustical engineer personally installs every pair applying our proprietary algorithms for optimal in room performance. Specifications: Three-way actively crossed-over design with:
Share
Share on Facebook Tweet on Twitter Pin on Pinterest